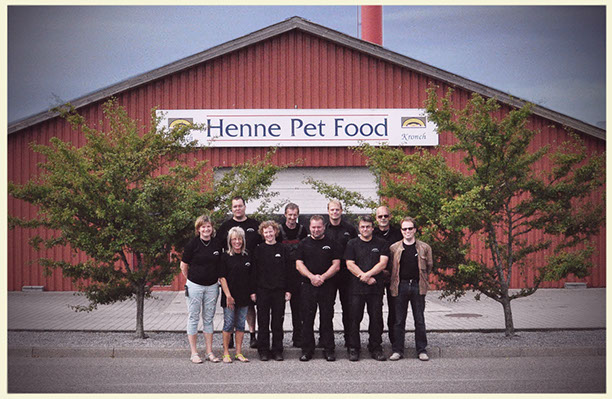 Henne Pet Food A/S is a Danish family run business with production facilities in Outrup, Denmark, as well as a distribution department in Flensburg, Germany. Our speciality is the production of feed and feedstuffs for dogs and cats, based on real fresh salmon.

Fresh, because we get our salmon delivered straight to our door from our good neighbour and business partner, which is one of Europe’s leading producers of salmon for the food industry.

Our production of petfood started back in 1993, and from the very beginning it has been our philosophy to produce petfood with a respect for nature, and with a love of the animals we are nourishing. This is why we use only raw materials of the highest quality, many of which are manufactured locally. We aim to support our local community whenever possible, which is why our suppliers of fresh salmon and many other products are locals. All of our fresh salmon are carefully processed at our factory, in order to make sure that the positive properties of the salmon oil and salmon proteins are transferred to our feed.

Our mission is to grow conservatively at a rate which fits our organisation. As a result, we have business partners all over Denmark, and currently export our products to 26 countries all over the world. 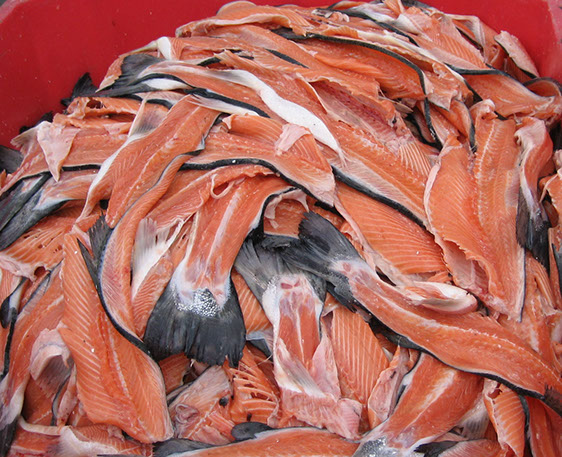 Salmon as a Source of Fat

Fat is the cats and dogs most important source of energy. Fat provides your dog and cat with the essential omega-3 and -6 fatty acids, both of which are necessary for maintaining the dogs and cats bodily functions.

Using salmon as a source of fat allows us to transfer the essential omega-3 and -6 fatty acids found in salmon to our feed. The feed's high Omega-6 content has a positive effect on the dog's skin and coat, and helps to counteract coat problems, such as allergies, dry skin, shedding, itching, dandruff, and dull coat. Furthermore, the feed's high Omega-3 content helps to strengthen the immune system, to increase fertility and to reduce the risk of cardiovascular disease.

Salmon as a Source of Protein

When the feed is digested, it's proteins are broken down into amino acids. These amino acids are then absorbed into the bloodstream and distributed throughout the body. These amino acids help to build, maintain, and repair tissue, muscles, bones, and the dogs internal organs.

Proteins from salmon have a very high biological value. The biological value is a measure of how large a part of the proteins the dog is able to exploit. Salmon proteins have a biological value of 94%, which is very high compared to other animal protein sources (see The Protein Scale). This results in an easily digestible feed with a very high utilisation rate, the result of which is a lower feed consumption, and a reduced amount of feces.

Salmon alone is, of course, not enough

This is why our feed is composed of the best possible quality controlled raw materials. It is also correctly balanced with regard to nutrients, vitamins and minerals.

Choline Chloride and lecithin are added to the feed, both of which help to increase the dog's metabolism. As a result, the dog will need less feed to receive the same amount of energy, and will eat less.

During extrusion, the ingredients are heated up at high pressure to more than 130 degrees centigrade. This kills off all bacteria, and causes the starch in the cereal products to react with water, producing easily digestible carbohydrate. In other words, the starch from the cereal products is made available to the dog, which results in increased absorption and better feed utilisation.

What antioxidants are used?

Only approved food grade antioxidants are used in production. This ensures a healthy and tasty feed, which enjoys a very high acceptance rate among allergy sufferers.

Salmon: Added in the form of salmon bits cut off from fresh salmon, which are later used for smoking. These bits of salmon are cooled down to about 3 degrees Celsius, right up until the point where they are used in production. In other words, the salmon is treated as if it were intended for human consumption.

Fishmeal: Only Danish produced fishmeal of the highest quality is used. It is made of fish from the north sea.

Blood meal: Only spray dried pig's blood from Danish pigs is used. Blood meal contains approximately 87% protein and is easily digested. It is also a natural source of iron. All the iron in our feed is added in the form of blood meal.

Brewer's Yeast: is dried yeast from the beer production. It contains about 50% protein, but is added due to it's Vitamin-B content.

The remaining protein comes from cereals: approximately 12% barley, 13% wheat, 10% corn and 9% rice. No soy proteins are added, as these aren't utilised as well by the dog as fish proteins.

Rice: European grown. So called “broken rice” is used, which was excluded in the production of cooking rice. In other words, it is the same rice as used for human consumption.

Sugar beet: Danish produced sugar beet pills. In the production of sugar, the beet are dissolved in warm water, leaving behind a mass resembling porridge. This “porridge” is dried and formed into pills. It is these pills that are added to our feed. These pills normally contain less than 1% sugar and large amounts of partly digestible plant fibres. Sugar beet are mainly added because of their fibre content, which stabilise the dog's intestinal flora, and ensures the dog a healthy and well functioning intestine, which helps give the dog's stools the right consistency.

During extrusion, the ingredients are heated up at high pressure to more than 130 degrees centigrade. This kills off all bacteria, and causes the starch in the cereal products to react with water, producing easily digestible carbohydrate. This carbohydrate is easily digested by the dog, unlike starch, which the dog cannot utilise.

Salmon: See above. Contains up to 18% fat in the form of Salmon Oil. Properties (see Kronch Salmon Oil).

Fish meal: See above. Contains about 10% fat in the form of Salmon Oil.

Lard: Only food-grade lard is used, meaning that is is the same as is used for human consumption. The lard is melted and sprayed onto the dry heat extruded pills, that absorb the lard.

Only approved minerals and vitamins are added. Furthermore, our feed is produced in accordance with the AAFCO norms. (see AAFCO)

The sled patrol Sirius at work in the Arctic Greenland

The dogs in the Sirius Patrol are exposed to some of the harshest conditions imaginable, and they love it. Nature has built them to withstand the extreme cold and physical challenges they face everyday. Furthermore, the dogs are fed with Kronch Pemmikan on their expeditions, which keeps them in top shape, both physically and mentally.

Kronch Pemmikan has been developed specifically for the Sirius Patrol. Henne Pet Food, in cooperation with the Sirius Patrol, has succeeded in developing a high energy feed, that fully meets the needs of the dogs under the extreme conditions they face on their patrols.

Pemmikan is an old Indian invention, that originally served as an efficient travel ration for human beings. It is a mixture of meat and fat, which is rich in protein and contains large amounts of energy. It is easy to pack and store, and it can be kept for eons. These days, one of it's uses is as dog feed on arctic expeditions, where dogs and dog sleds are used.

The expedition started on the 11th of February in the year 2000.

Six young men went on a 3500 kilometer long polar expedition, through one of the largest pristine wildernesses in the world. The patrol started out from Qaanaaq in the west, and followed the coast of North and Northeastern Greenland, to finally arrive in Daneborg in the east.

The expedition marked the 50th anniversary of the Sirius Patrol. His Royal Highness, Crown Prince Frederik of Denmark took part in the expedition, along with a cinematographer, whose footage secured an unprecedented documentation of the entire expedition for generations to come.

All feed used on the Sirius Expedition 2000 was delivered by Henne Pet Food, and it was this feed, that contributed to making the expedition a success.

On the Sirius sled patrol, the dogs were normally fed at 3 different times throughout the evening. Every dog was fed 400 grams of Pemmikan when the expedition made camp. A little later they were fed 350-400 grams of dried fish, or the same amount of Kronch Fiber. Finally, late in the evening, they were fed a lump of lard, weighing 125 to 250 grams (the colder, the more fat). The dogs bite and play with the dried fish, whose consumption may take from 15 minutes to an hour. The dried fish acts as a source of important proteins for the dog. The Kronch Pemmikan, which basically consists of fat and sugar, provides plenty of fuel for the dog's muscles.

Kronch Pemmikan consists of fat (the percentage of fat is as high as 58,5%!), salmon, fish meal, barley, maize. Brewers yeast and various vitamins and minerals. It is a bar containing an extreme amount of calories, containing as much as 6000 kcal. per kilo, or approximately 2400 kcal. per bar.

Kronch Pemmikan increases the dog's stamina, while also making it calmer and easier to manage.